“I’m a Perfectionist. I Focus on Running Correct Technique” 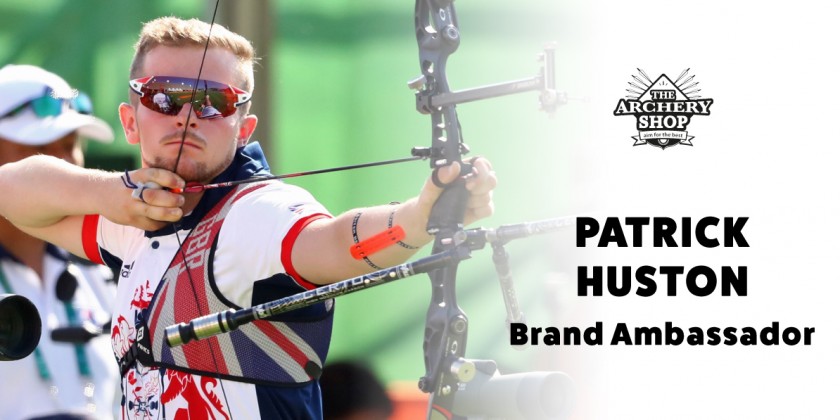 An in depth interview with Patrick Huston, The Archery Shop’s Brand Ambassador.

Born in Belfast in 1996, Huston has been shooting since the age of 8. He started the sport in primary school. At 14 he entered the Northern Ireland Elite Squad and began competing regularly in both local and regional tournaments.

He made his international debut at 16. Late 2014 saw him go full time with the Archery GB Olympic Programme. He set a World Record of 348 in August 2015, a precursor to the very successful European Championships in Nottingham 2016. A home crowd watched Patrick took individual Bronze, team Silver and Bronze in the Olympic Quota tournament. This made him the first GB archery athlete to qualify for Rio 2016.

In September 2017, he became the first archer to win the Great Britain National Series Recurve title three times in a row.

In 2017 he achieved his peak of 14th in the World Archery rankings. The season was capped with a Mixed Team Bronze won at the World Championships in Mexico City alongside friend and team mate Naomi Folkard.

Coming into the 2019 season he is ranked 2nd in the Archery GB National Rankings and he has been selected for the GB Recurve Team for the Shanghai and Antalya World Cups 2019. Patrick then made the selected teams for the World Championships in the Netherlands and the European Games in Minsk along with Tom Hall and Alex Wise.

During the World Archery Championships in the Netherlands (10 – 16 June 2019), he had his international personal best score of 675, team ranking 8th with highest cumulative score ever. He won the second round team match versus Japan to gain Olympic Quota.

He is one of the 6 British archers who qualified for the Tokyo Olympic Games – 2020.

TASH: You seem to have been shooting forever. You basically grew up with the bow in your hand. Why archery? How did you choose this sport or did this sport choose you?

P.H.: So, I started shooting at 8, purely recreational fun in an after-school club. I took it up outside school at 12 and then started competing at 13. Frankly… I went with archery because it didn’t involve me running around, or rolling about in the dirt!!

TASH: Since 2014, you have been training full-time at Lilleshall National Sporting Centre and currently you train under the senior national coach Richard Priestman – Archery UK. What does “full-time” mean for an Olympic athlete? And how does a regular day of training look like?

P.H.: In years gone by full time meant my major focus was archery, but the training regime had been fairly easy and we would come and go as we pleased, most of the time. Nowadays with the addition of Sarah Smith and team manager and Alberto Zagami as assistant coach we have a lot more intense archery going on. We start the day around 8:30, have lunch 12:30-2:45 and then shoot till 6 again, with gym on top of that three to four times a week! It’s a lot of work through the day, and very tiring at times with 140m of walking every 6 arrows or so. We are now running individual programmes to condition us and directly work on areas needing improvement. Outside these programmes we do regular structured sessions with team, mixed team and individual elements.
Full time means your body takes a battering nearly every day, you are mentally knackered at the end of it, and you have to be totally up on your nutrition to repair properly! A funny habit I have picked up is that when I mix with non-athletes and somebody is coughing, I literally jump away from them.  The first time this happens they are a bit out, but they understand, and after that it becomes a bit of a joke.  But seriously, a three days stint of being under the weather can have a lasting effect on conditioning!

TASH: Tell us, please, about your colleagues at Lilleshall National Sporting Centre. How are they? How do you work with them?

P.H.: Nowadays we have a fairly good group of athletes at Lilleshall. Tom hall, myself, Naomi and Sarah Bettles are full time. Tom Barber is full time (paid by the RAF) and the rest spend 2-3 days there a week.  Frankly I love working with all the guys at Lilleshall.  We have a very enjoyable atmosphere between us and a lot of good banter!  It’s most noticeable on sunny afternoons when everyone relaxes and chats loads, really enjoyable times. I will have many nice memories from this period of training! I would like to say the men’s Recurve team has a particularly nice atmosphere about us, real camaraderie and friendship, which I think will be fantastic for us moving forward towards Tokyo and the next Olympic cycle.

TASH: How do you feel when you are shooting? What does your body do and what does your mind do? Do you need “special powers” to achieve this type of performance?

P.H.: When I am shooting, I feel relaxed and happy most of the time.  Though I will be honest and say that I am a perfectionist and I get very frustrated when things aren’t going right.  I can totally accept that in heavy training sessions standards will drop, but I expect to shoot good groups pretty regularly! My mind is usually focussed on my shooting and trying to run correct technique.  Frankly I’m probably a bit over focussed on technique. But I do have a mental routine which I run from the moment I am on the line. I’ve experimented with a few different things.  Currently I am counting 1,2,3,4 through three times, each number attached to a technique step, by which point the shot should have executed.  This has really helped my shot timing!
When I am really on form in my performance there is nothing particularly special that I am doing, I have just done my thorough physical and mental warm ups, I am in the right state of physical fitness and the competition stress stimulates me just right.

TASH: What was the one thing that made Rio a unique experience for you, other than being your first Olympic Games?

P.H.: The Rio Olympics was a strange experience for me, there were some fantastic memories and experiences throughout the journey, and some lows, some annoyances, and some loneliness. It’s a strange game; going to the Olympics. Probably the stand out memory and special moment for me was just after I walked out onto the finals field where all the matches are held. I was stood there on my side of the field while my name was announced.  I distinctly remember staring down the HUGE camera in front of me with a powerful mixture of pride, confidence, nervousness and intensity. You can see this very obviously if you watch the clip back.  Those few seconds will stand in my mind forever!

TASH: You are planning to launch an archery programme that supports and promotes this wonderful sport – can you tell us more?

P.H.: I want to get more people to enjoy the sport of archery in a truly fun and recreational way. I think foam tipped arrows and light poundage bows provide the flexibility to take archery anywhere and let people try their hand at it. Once their interest has been caught, we will introduce them to shooting under exact guidance, in a learning environment and lesson structure which promotes correct learning and continued progression.  There is a lot more in this plan which I won’t go into detail in this interview.

TASH: How does a regular “day off” look like, for Patrick Huston, if there are any? What other particular activity brings joy to your life?

P.H.: To be honest, I’ll normally have a lie in. Then I’ll have my breakfast and watch some YouTube videos. Then sit around and enjoy some banging tunes on my rather fantastic surround sound system.  We now have about 25 speakers around the entire house!  I love walking in nature and there is a beautiful woodland just two minutes from my house so normally I will head out on my own for a walk in the woods. Then, unfortunately, I will normally have some errands to run. The evening is usually spent with my girlfriend Hannah, or my housemates.

TASH: What advice would you give to your younger self, would you have done anything different?

P.H.: In terms of advice to my younger self: bow training, bow training, bow training. I didn’t know about this style of training and it would have rapidly improved my standard at a younger age. I would also recommend that I paid more attention to detail with tuning my equipment and setting it up to the exact measurements (frankly I still need work on this!). The final thing I would say is to relax my back forearm and hand, letting only the required tension be held in the fingers.

Thank you very much, Patrick and welcome aboard!